New to our collection at The Cottage Shop is the De Carlini Cowboy Santa Ornament which is decorated in a brown glitter cowboy hat with a red band, red button-down shirt with white fringe, black belt with silver buckle, blue pants and red glitter western boots! This item is adding to our growing Cowboy ornaments collection. As a member, you will receive notification of all new styles as we receive them. If you are not a member, join today and receive 10% off your entire ornament cost for a year!

In the early 1500s, the Spanish arrived in the Americas and built ranches to raise cattle and other livestock. They imported horses from Spain to use them for this purpose. The Mexican vaqueros were known for their roping, riding and herding skills and were hired by ranchers to tend their livestock. Through the 1700s, these livestock practices spread and were introduced to more areas in the West.

In the early 1800s, many of the English settlers that migrated to the West adapted the vaqueros’ culture. When the railroads were being built, cowboys were hired to herd and round up livestock that were transported around the country for sale. Not only would cowboys herd cattle but they cared for the horses and repaired fences and buildings.

The role of the cowboy declined in the 1900s but Hollywood movies and television shows popularized the cowboy lifestyle. People idealized stars such as John Wayne and tuned in to the adventures of the Lone Ranger.

The typical cowboy would wear gear to protect them in their daily routines. The large hats with wide brim would protect them from the sun. Their boots would help them ride horses. Their bandanas would guard them from dust. Chaps were used to protect their legs from cactus needles and rock terrain.

Even though opportunities have shifted and cowboy professions have decreased, the American cowboy remains a huge part of the western American life.

The Cottage Shop presents the De Carlini Cowboy on Horse Ornament. This item is uniquely crafted with a Cowboy riding a horse. One arm up in the air and one holding the rein, this ornament will come to life on your Christmas Tree!

The De Carlini Cowboy Owl Christmas Ornament is wearing a brown glitter hat, plaid scarf and holds a lasso. This adorable ornament would make a great gift by itself or part of the De Carlini Owl Ornaments collection.

The De Carlini Cowboy Mermaid Italian Christmas Ornament has a brown wide brim hat and matching riding gloves. This mermaid ornament is waiting with all the details needed to feel like you are in the west! Perfect gift by itself or pair it with one of our other De Carlini Mermaid Ornaments. 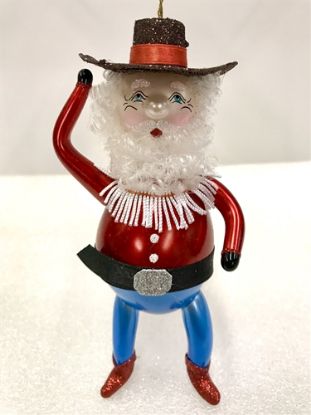 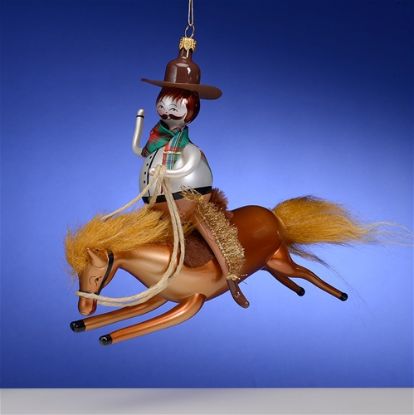