Dragons have appeared in many ancient cultures around the world. They have been revered in ancient China and associated with emperors. Through history, dragons have been depicted in precious jewels, gold, and jade and referenced in literature. Dragons are giant lithe creatures that dwell in either water or clouds. They are powerful and fly through storms. Dragons are one of the earliest creatures to appear in tales and legends. Excavations of the Hongshan culture found carved jade dragons that date back to 4500-3000 BCE. Some descriptions of dragons depict them with a body of a snake, belly of a frog, antlers of a deer and eyes of a rabbit. The Chinese scholar Wen Yiduo suggested that the reason for this compilation of different animal parts was based on the political union of different tribes. Each tribe had their own animal as their totem and the dragon became a symbol of their assimilation into a single nation. China has always regarded dragons as benevolent creatures and they were associated with emperors who were seen as God’s representatives on earth. Emperors wore silk robes with dragon motifs and sat upon dragon carved thrones. Dragons are also considered one of the four most intelligent animals. In Chinese mythology, a dragon helped the founder of the Xia dynasty, Yu the Great, to manage the floodwaters which were devastating the kingdom. In folklore, there was a race of dragons led by their Dragon king Lung-Wang. These dragons could take human form and whisk away young girls. In paintings of Chan Buddhism, there is a dragon appearing behind the clouds which symbolizes truth and the difficulties of seeing it clearly. In Taoism, the dragon represents the central omnipresent force. In the Chinese zodiac, the dragon is the 5th sign and is associated with one of the 12 years in the calendar cycle.

The Limoges Blue and Red Chinese Dragon Box holds a pearl ball and has a blue and gold base.

The Limoges Chinese Gold Dragon Box has a gold dragon atop of red table.

The Limoges Oriental Dragon Fan Box has a painted orange and red dragon and includes a porcelain fan.

The Limoges Red Dragon Square Box is painted with flowers around the base and has a crafted Chinese lady clasp.

The Limoges Green Oriental Teapot with Dragon Box is a beautiful item and would complement your collection! 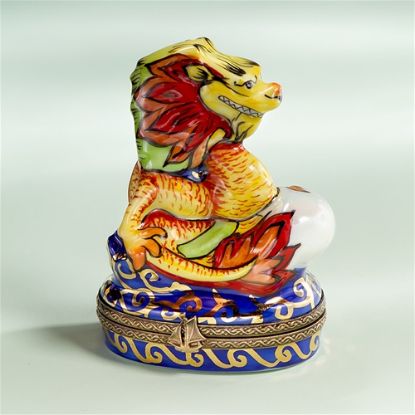 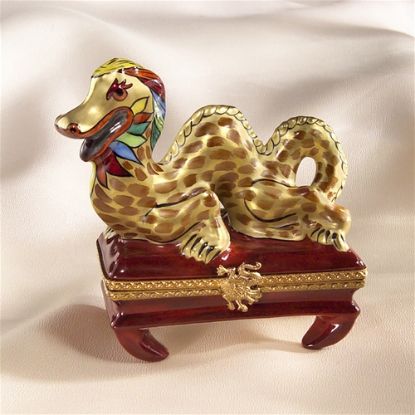