Saint Patrick was born in the late 4th century in Roman Britain. At the age of 16, he was kidnapped, forced into slavery and taken to Ireland by Irish marauders. For 6 years, he worked as a herder. He found comfort in his religious faith and eventually escaped after having heard a voice in a dream. He found passage to Britain and reunited with his family. Patrick had another dream in which he heard the pleas of Irishmen begging him to return to their country. Patrick was ordained as a bishop after studying for priesthood. He returned to Ireland in 433 to preach the Gospel. He is responsible for converting several thousands of Irish to Christianity. After 40 years of traveling, teaching, and establishing monasteries, churches and schools, Patrick passed away on March 17, 461 in Saul. The Cottage Shop offers a variety of Limoges boxes to commemorate Irish heritage and to celebrate St. Patrick’s Day. The Limoges One Ireland Beer Stein with Ale Box has an Ireland landscape painted inside a clover silhouette.

Many legends surround Saint Patrick. It is said that he baptized hundreds of people on a single day. Another says that he used the shamrock to teach the Holy Trinity to the Irish. Many artworks of Saint Patrick show him trampling on snakes. People believe he is responsible for driving them out of Ireland. The Limoges Irish Baby in Buggy Box is painted in a light green with dark green clovers on the draped blanket. This box includes a porcelain baby with red hair and a matching light green diaper that lays nestled in the buggy. The Limoges Irish Clover Box is painted with 4 leaf clovers and the spear thistle of Ireland.

For centuries, March 17 is observed as a religious holiday in Ireland. Citizens attend church in the morning and have celebrations in the afternoon. It is both a day for celebration and remembrance. During 1845 to 1851, Ireland’s primary food source did not grow well and they suffered through the Great Famine. The British government did nothing to help so instead of celebrating St. Patrick’s Day, the people gathered in protest against the British. The Limoges Irish Good Luck Box is a perfect gift for those who are looking for some Irish charm. This box has 4 leaf clovers, thistle, ladybugs and a horseshoe with the inscription “Good Luck” painted on the top. The Limoges Irish Heart with Clover and Bow Box has a 3D porcelain green bow painted with gold clovers and includes a porcelain green 4 leaf clover.

On March 17, 1737, Boston hosted the first meeting of Irishmen on American soil to honor St. Patrick. In 1762, New York City held the first St. Patrick’s Day parade for Irish soldiers serving in the English military that marched through the city. The parades continued and eventually became a symbol to show unity and strength for persecuted Irish-American immigrants. Today it is a regular part of Irish-American heritage celebration. U.S. cities with a large number of Irish immigrants host extensive celebrations which include parades, traditional Irish music, green attire, green beer, soda bread, corned beef and cabbage, and other practices.  The Limoges Clover Beer Stein Box is painted with green clovers and gold accents. The Limoges Irish Violin with Clover Box is shaped like a traditional violin case and includes a porcelain violin that is painted to showcase the beautiful form of the instrument. The Limoges Green Barrel with Irish Beer Bottles is painted to look like wood texture and includes 3 porcelain beer bottles.

In 1995, the Irish government funded a large-scale campaign to market St. Patrick’s Day as a way to drive tourism and share Ireland’s charm with the world.  Today, tourism is one of Ireland’s most important economic sectors. It employs over 300,000 people and generates billions of euro in revenue a year.

The Limoges 2 Story Birthday Cake with Lucky Clovers Box is painted green and white with green clover accents. This box comes with a porcelain gift with a painted gold bow and green clover.

The Limoges St Patrick’s Day Irish Shopping Bag with Clover Box has green vines with clovers painted on the front and includes a porcelain card with a green clover on it.

The Limoges Irish Basket Box has a 3D clover on top and comes with porcelain plates painted with the sheep, 4 leaf clover, Irish flat cap, and the Celtic cross.

The Limoges Irish St Patricks Day Shoes Box is delicately painted and includes two shoes with heels and an Irish clover painted on each.

The Limoges Irish Telephone Box with Message includes a porcelain card with a Gaelic greeting “Dia Dhuit” inscribed on it. 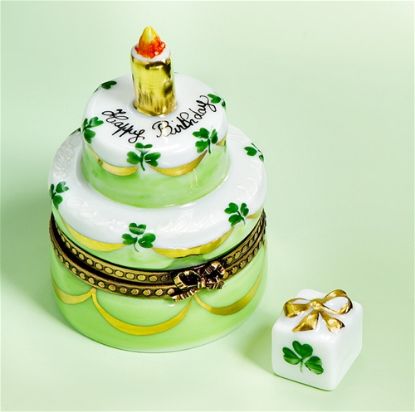 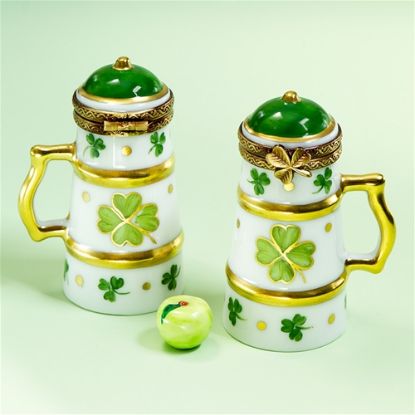 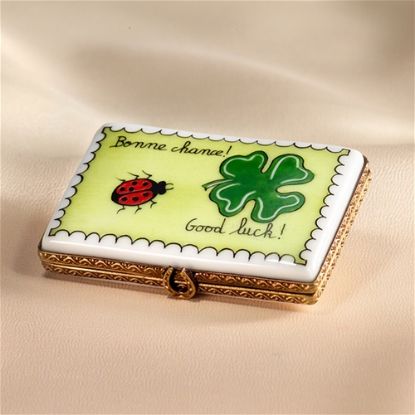 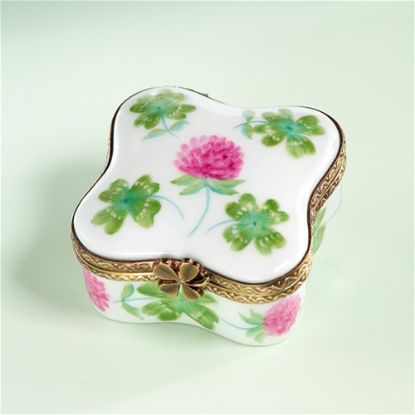 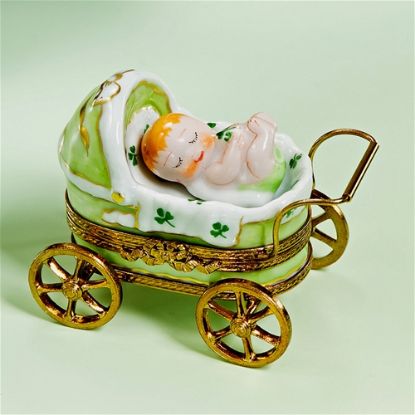 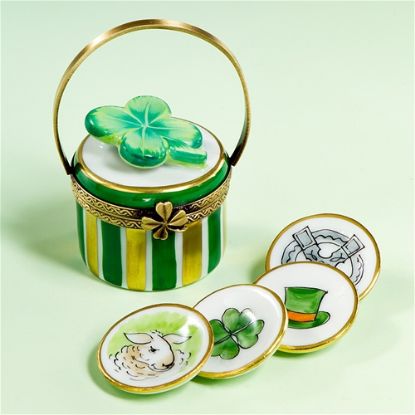 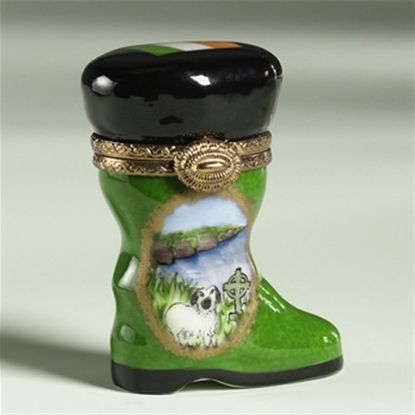 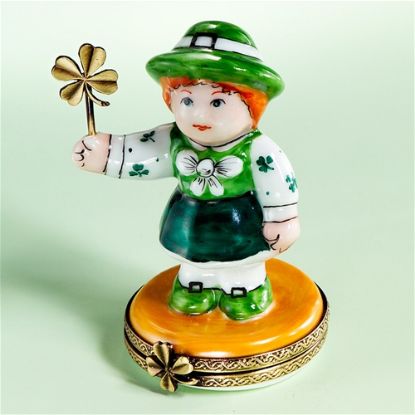 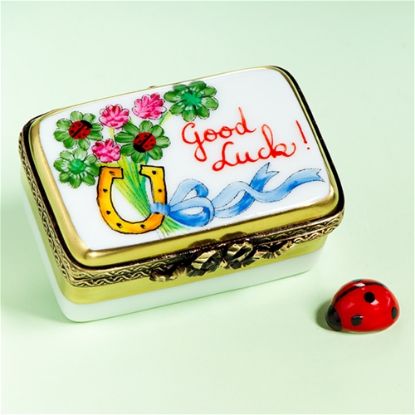 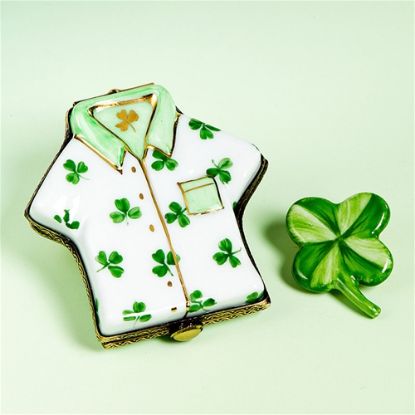 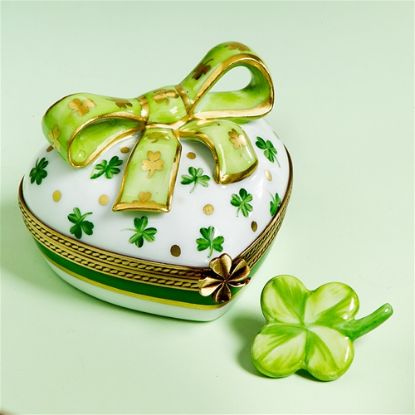 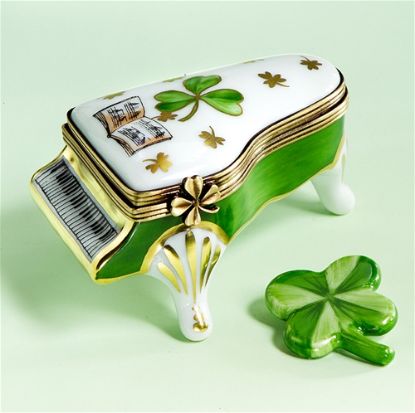 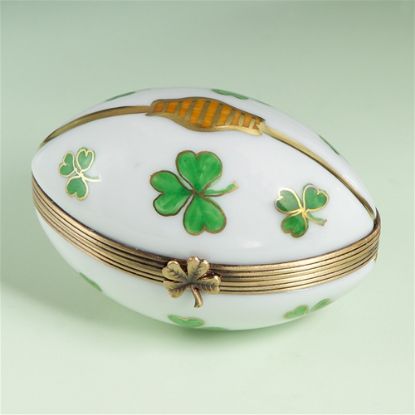 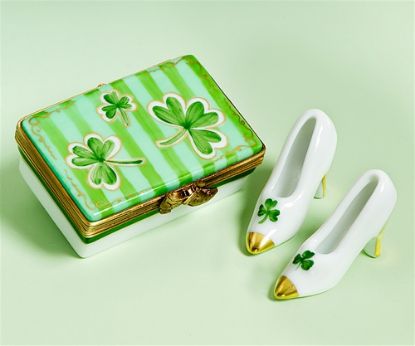 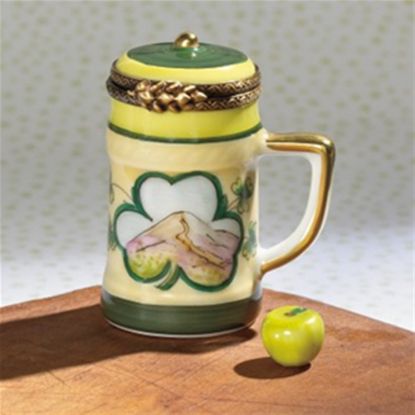 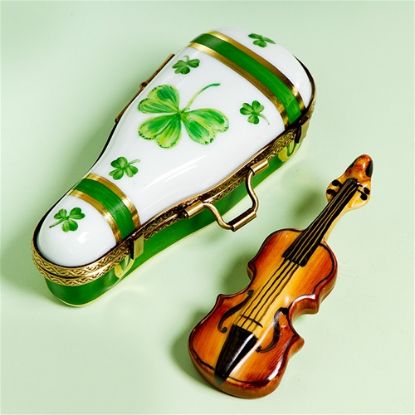 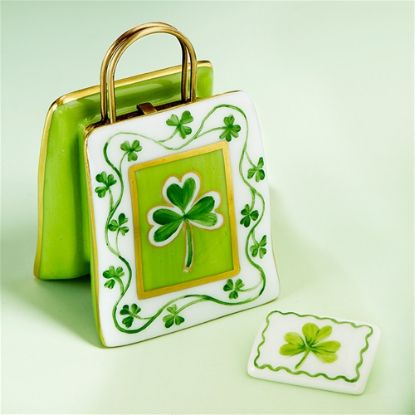 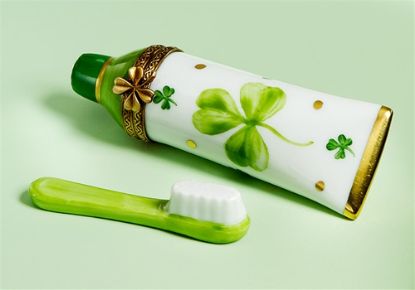