Limoges French hand painted Frog Boxes have arrived at The Cottage Shop! for the exquisite collector!

The Cottage Shop offers a variety of Limoges Frog Boxes. Frogs are cold-blooded tailless amphibians from the order Anura. They are known for their leaps, squat, hops and ribbit noises. Generally, frogs have protruding eyes which allows them to see in front, to the sides and partially behind them. They also have excellent night vision. Their skin is moist and their webbed hind feet allow for leaping and swimming. Frogs are able to leap more than 20 times their body length. There are over 4,000 known species of frogs in the world. Most are aquatic but some live in burrows, trees and land. There are tree-dwelling frogs that are able to glide 40-50 feet by expanding their webbed fingers and toes. There are also frogs with adhesive toe disks to allow climbing. Many frogs have poisonous skin glands that secrete a toxin when threatened. In most species this poison isn’t enough to provide protection again predators such as mammals, birds or snakes. A small variety of frogs such as the poison dart frogs from the rain forests of Central and South America can kill small animals and sometimes humans. Frogs depend on their camouflage skin to blend with their backgrounds. Some species even change color. Many species have bright colored skin on their underparts that flash when the frog moves. Lily pads often provide hiding places for frogs from underwater predators. They are able to relax on top of them while catching food. Frogs eat insects, other small arthropods and worms. Several species also eat other frogs, reptiles and rodents. When frogs swallow, they pull their eyes down into the roof of their mouth to help push the food down their throats. Frogs usually breed annually and in fresh water. Most frogs fertilize their eggs outside of the female’s body. Depending on the species, females will lay a few hundred to several thousand eggs. Eggs will float in clusters and may attach to the stems of water plants. Some species eggs sink in the water rather than float. The marsupial frogs keep their eggs in a pouch until they hatch. The Suriname toad of South America carries her eggs embedded on her back until they hatch. When the eggs hatch, the tadpole will metamorphoses into a frog after a period of 2 months to 3 years. Some species of tropical frogs will deposit their eggs on land. Their young will hatch as froglets rather than tadpoles. The gastric brooding frog of Australia will swallow her fertilized eggs and when they hatch, tadpoles will remain in her stomach for up to 8 weeks before emerging from her mouth. The male Darwin frog of Chile and Argentina will swallow eggs that are about to hatch and store them in his vocal pouch until they develop into juvenile frogs. Evidence shows frogs have roamed the Earth for over 200 million years. The goliath frog is the largest in the world weighing up to 7 pounds and having a length of up to 15 inches.  One of the smallest frogs in the world is the Paedophryne amanuensis which is about 7.7mm in length and can be found in Papua New Guinea.

The Limoges Rainforest Frog Box is painted with intricate details showing the toe disks and the colorful variations of its skin.

The Limoges Two Frogs on Waterlily Box has two frogs facing each other atop of a beautiful pink lily and leaf pads.

The Limoges Frogs on Leaf Box has two frogs dressed as humans. The lady frog wears a pink dress with her legs crossed and the male has a pair of blue slacks and red jacket.

In ancient Egypt, frogs symbolized life and fertility. The River Nile floods annually between June and September in which the Egyptians called akhet. It brought an ideal breeding ground for frogs in barren lands. Since the floods, millions of frogs were born annually. The goddess Heqet is depicted as a frog or as a woman with a frog head.

The Limoges Frog Playing Cello Box is sporting a pair of yellow paints with red polka dots and a black jacket with tails. The base of this box is painted dark green and is shaped like a lily pad.

In Native American mythology, some tribes believe frogs have healing powers and the ability to bring rain. The Anishinabe tribes believe that the frog represents transformation and growth. The Northwest Coast tribes associate frogs with springtime and renewel. Other tribes believe that frogs bring bad luck and disease. In some Southern California tribes, the Frog killed their creator god with evil witchcraft.

The Limoges Frog on Fall Mushroom Box has a variety of leaves painted on the base with blue, orange and red 3D mushrooms on top.

In Roman mythology, Latona was the daughter of Titans, Coeus and Pheobe. She conceived two children by Jupiter, Diana and Apollo. Jupiter’s wife, Juno, was angry when she discovered the pregnancy. Latona fled and arrived to a pool in a marsh to drink water. Local pheasants tried to prevent her from drinking the water so she cursed them into frogs. This myth inspired the Latona fountain in the garden of Versailles which depicts Latona with her young children surrounded by frogs. In Greek mythology, Latona is known as Leto.

The Limoges Frogs See Saw Box with Mushrooms has one frog dressed in blue overalls and another dressed in a pink dress. This playful item is adorable for children or mothers.

The Limoges Frog in Watering Can with Umbrella Box has red poppies painted around the base with a frog sitting atop. The red and yellow umbrella matched the frog’s pants and complements this item nicely.

Aesop’s Fable 44 called The Frogs and Zeus tells the story of how the frogs were annoyed with each other splashing and hopping around so they asked Zeus to give them a king. Zeus told the frogs to rule themselves and they did not want to listen. He sent down a log in the pond to be their king and they denied it as such so Zeus sent a stork to rule them. The stork began eating the frogs and the frogs realized they should have listened and ruled themselves.

The Limoges Frog Reading Newspaper Box is designed with a frog leaning against of wicker basket and reading a book.

The Limoges Frog on Spa Bucket Box is painted with precise details to imitate the wood-look and has a frog relaxed next to a bar of pink soap. This item includes a porcelain tube of beauty cream.

The classic fairytale, The Frog Prince, tells a story about a prince who is turned into a frog by a witch. The details vary between versions but a popular includes the spell being broken by a kiss from the princess. In 1894, English painter William Robert Symond created The Princess and the Frog oil on canvas painting.

The Limoges Prince Frog Box is dapper with a blue cloak and a royal crown with red lining. This item brings the fairytale to your collection!

The Limoges Prince Frog with Heart Box has a frog painted with small red hearts sitting on a pink oval base with a rose placed at its feet. This item includes a porcelain red heart. 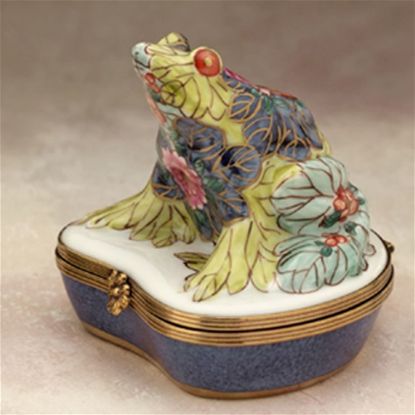 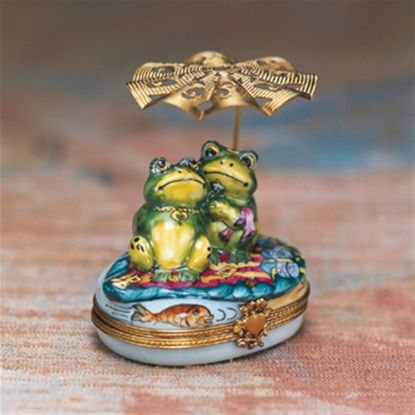 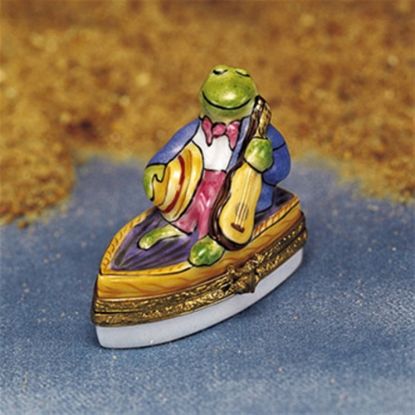 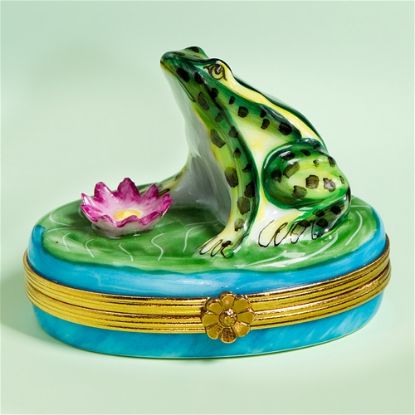 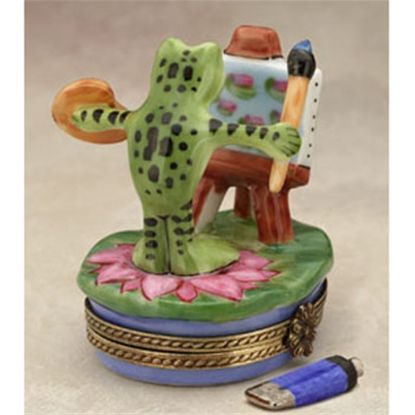 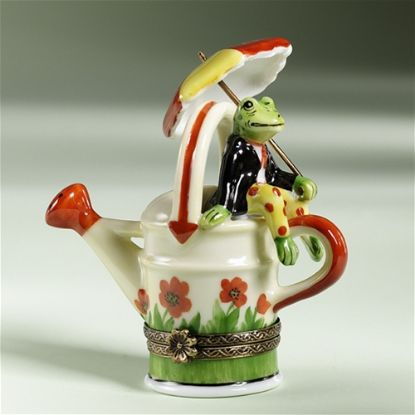 Limoges Frog in Watering Can with Umbrella Box 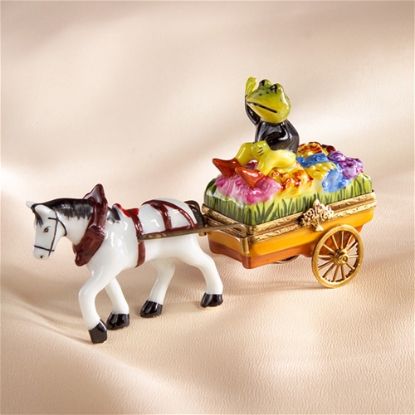 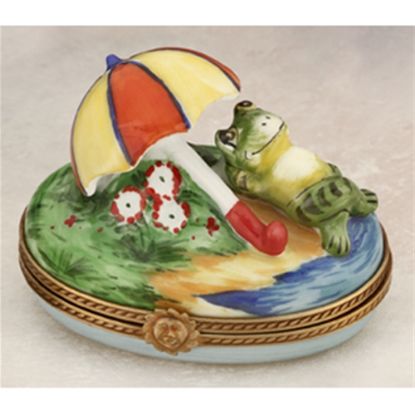 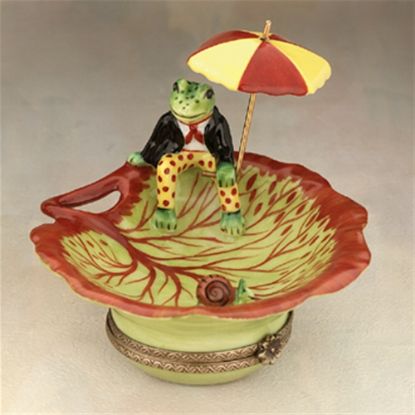 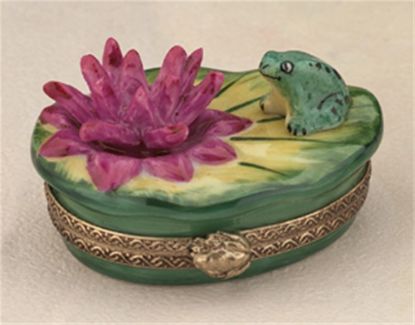 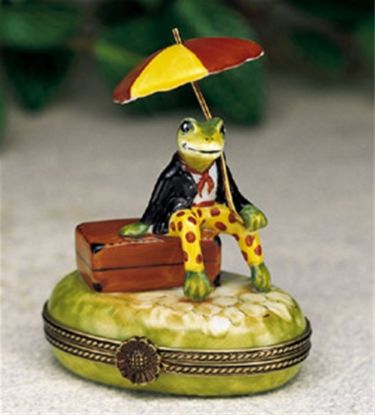 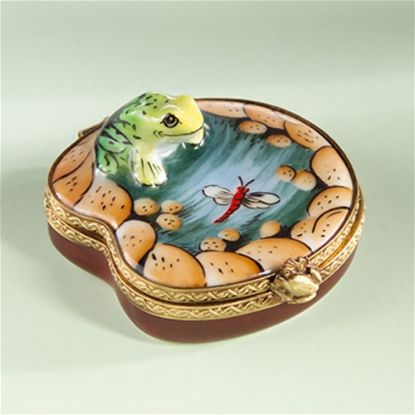 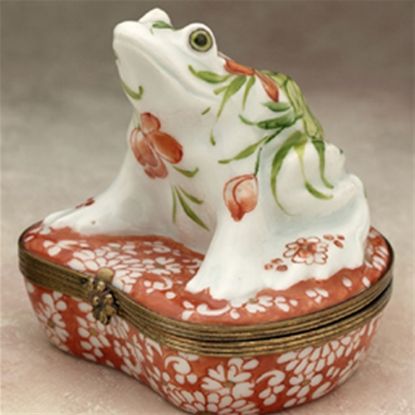 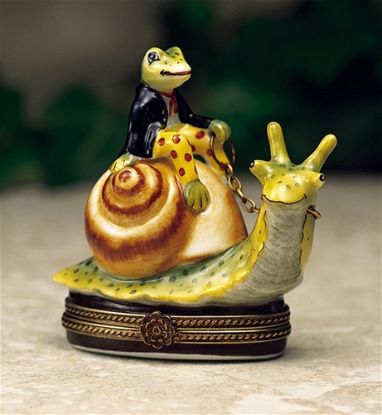 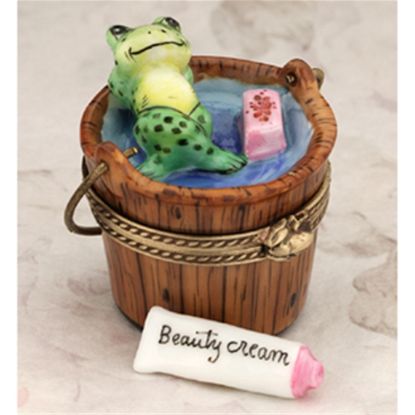 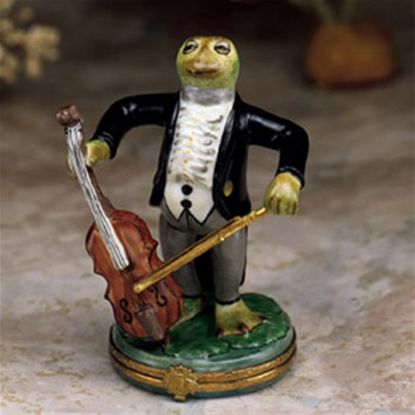 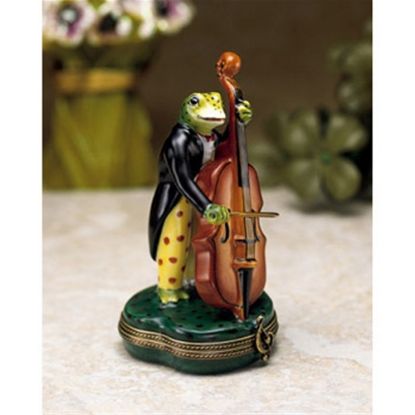 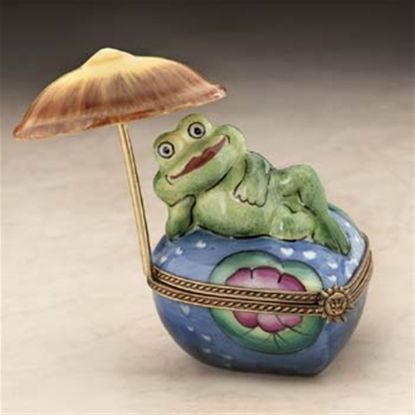 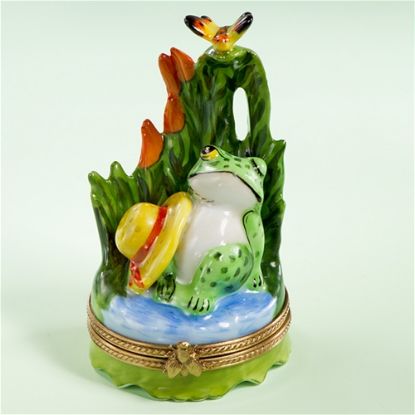 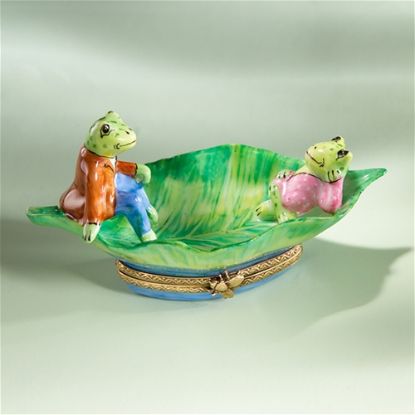 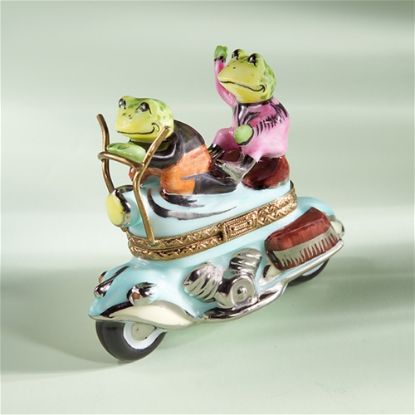 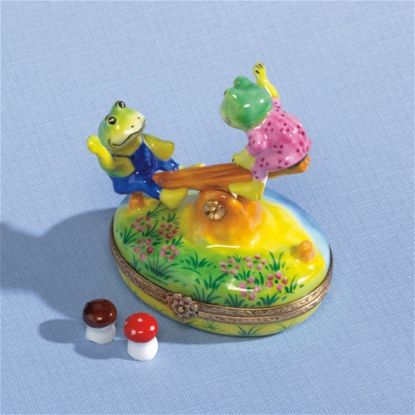 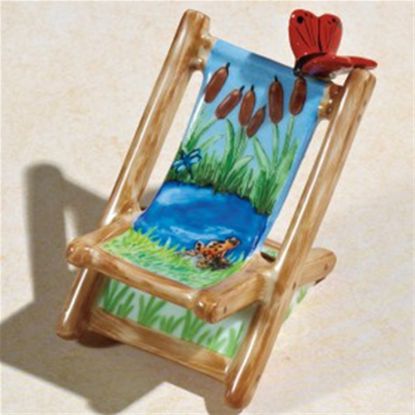 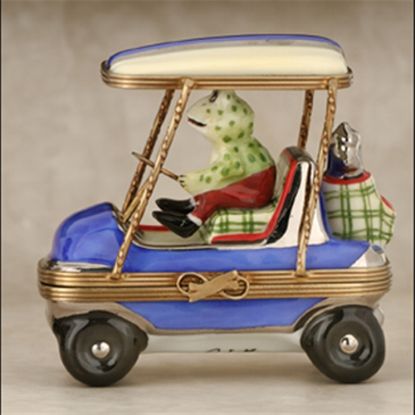