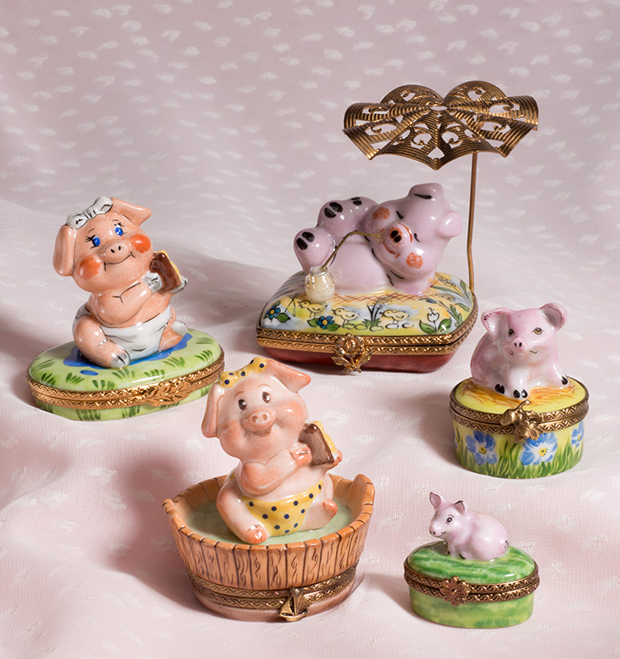 The Cottage Shop offers a variety of Limoges Pig Boxes. Pigs are domestic swine and mammals from the Suidae family. In the U.S., pigs are referred to younger swine weighing less than 180 pounds. Anything larger is called hogs. In Britain, pig refers to all domestic swine. Male pigs are called boars and females are called sows. These omnivorous mammals are short legged and have a stout body. Pigs have hooves with two functional and two nonfunctional digits. They do not have the best eye sight but they have a great sense of smell. Pigs have very few sweat glands so they often roll in the mud to keep cool. The mud also helps protect their sensitive skin from sunburn. The average gestation period is 3 months, 3 weeks and 3 days. The average litter has 10 piglets. A newborn piglet weighs about 2.5 pounds. A fully grown pig can weigh between 300 and 700 pounds.

The Limoges Pig Family Box has a mother pig with her three piglets nursing. The base of this box is painted in green with a blue drinking hole.

The Limoges Baby Pig Taking a Bath Box is an adorable item with a white bow, white diaper and a scrub brush in hand!

The Limoges Pig by the Beach Box has a lounging pig on a painted scene of the seashore. This piece will bring you to the beach!

It is believed that wild pigs were introduced to North America by Christopher Columbus on his second voyage in 1493. Domesticated pigs were brought to America in 1539 by Spanish explorer Hernando de Soto. He brought 13 pigs to Tampa Bay, Florida and the pork industry grew. The three categories of domestic pigs are large-framed lard, smaller bacon types and pork types. The large-framed lard type of pig has a comparatively thick layer of fat and weighs at least 220 pounds. The smaller bacon type of pig weighs about 150 pounds. The pork type of pig weighs about 100 pounds. Fossil records show that pigs have been roaming the earth for at least 40 million years. Pigs are very smart and have a higher intelligence than a dog and even young children. Pigs are naturally very clean animals and given sufficient space, they keep their toilets far from their living and feeding areas.

The Limoges Pig Chef Box is designed in a prestigious chef’s uniform.

The Limoges Pig See Saw with Babies Box is a unique item with two piglets on a see saw. The base is painted with green grass and red flowers and includes two porcelain pigs.

Gaining popularity toward the end of the 15th century, the French used pigs to hunt truffle. The truffle is an edible prized fungus that is most valued in French cuisine. Female pigs are still used today because they are attracted to the truffle’s scent that is similar to the male pig pheromones.

The Limoges Pig on Restaurant Easel Menu Box has a daily specials menu written in French and a pig holding a bunch of vegetable.

Pigs have been used in biomedical research in the areas of cardiovascular, metabolic liver, gastrointestinal, reproductive and infectious disease. The bio prosthetic heart valves from pigs are used in tens of thousands heart valve transplant patients a year. Pigs suffering from hereditary metabolic disorders caused by enzyme deficiencies are used in gene therapy studies. Pigs are used as models for developing surgical procedures because their organs are similar in size to humans. Pig insulin was used to treat diabetes until manufacturers produced synthetic human insulin.

The Limoges Pig in Elegant Bathtub Box is painted in mother of pearl and includes a porcelain pig that fits sitting in the tub.

The Limoges Pigs by Fence Box has pigs with long snouts and pink skin with black patterns standing in a mud sty.

In Greek mythology, the Erymanthian Boar ravaged the farmlands of Psophis in western Arcadia. As one of his Twelve Labors, Hercules was sent to capture the boar. He chased the boar through the deep snow of Mount Erymanthos. He captured and brought it back alive to the king.

The Limoges Gold Pig on Blue Box will bring luck to your collection. The zodiac calendar recognized every 12 years as the year of the pig. The “year of the golden pig” occurs every 600 years.

The phrase “when pigs fly” has been circulating since the 18th century. Some believe it stemmed from the Scottish proverb in the 1500’s. It is used often as a way of saying that something will never happen.

The Limoges Bride and Groom Pig Boxes with Wings has beautiful crafted wings and is a great set for newlyweds!

During the middle ages, pots and containers forged from orange colored clay material called pygg were used to hold money. As the English language changed and evolved over time, pygg was pronounced pig.  This created a fun play on words and the piggy bank was born.

The Limoges Valentine Pig with Hearts Box is painted pink with gold lined hearts with roses in the center placed around the top. This item is complete with a crafted double heart clasp. 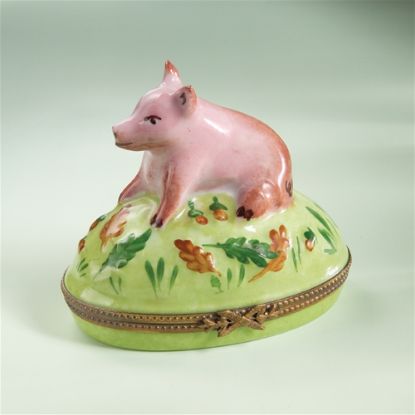 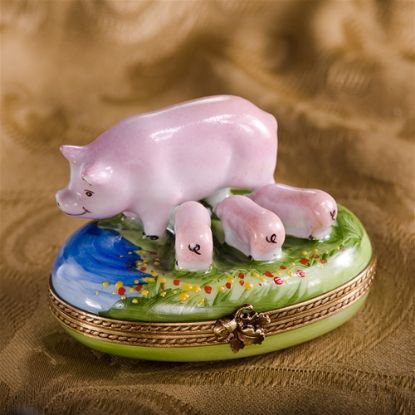 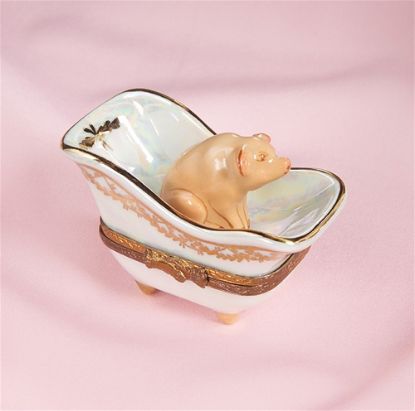 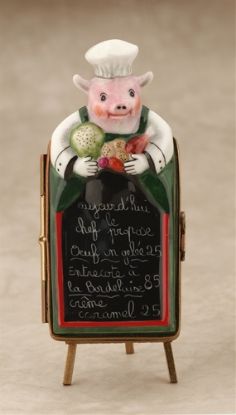 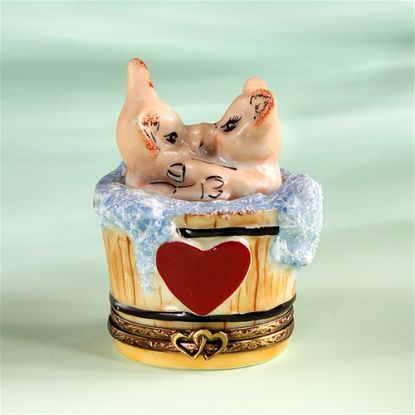 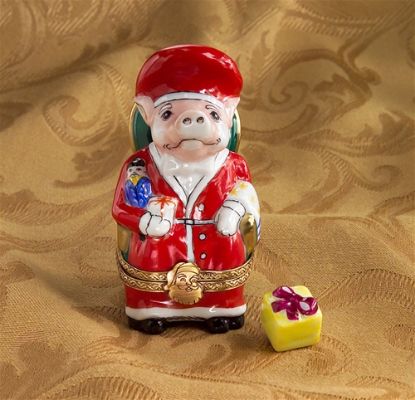 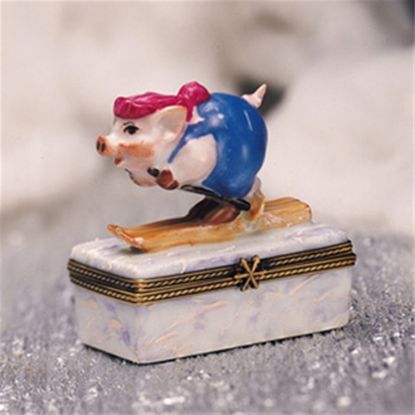 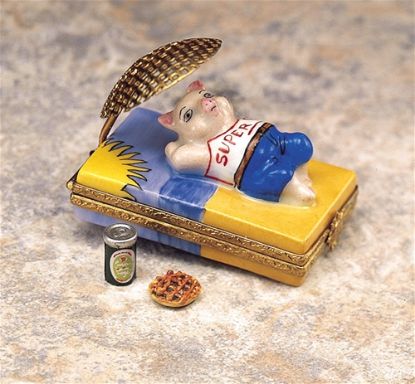 Limoges Pig by the Beach Box 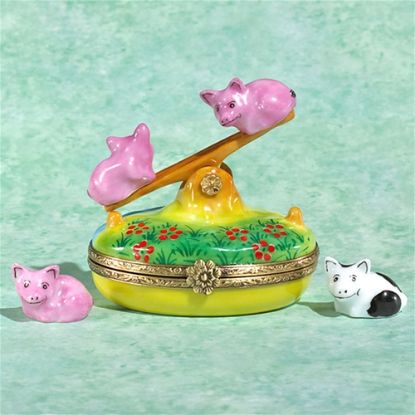 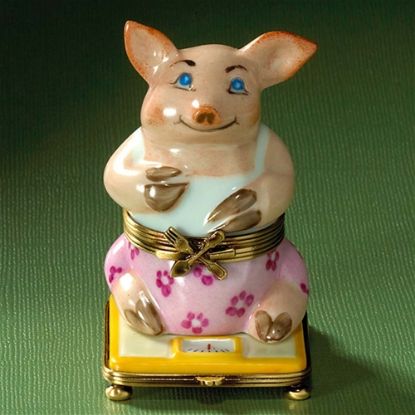 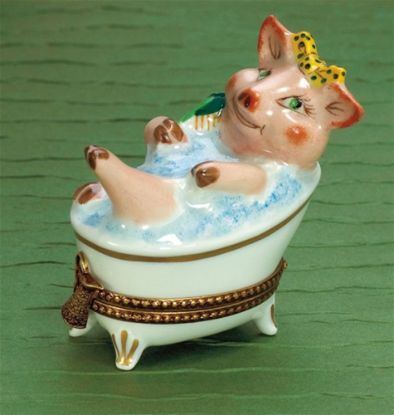 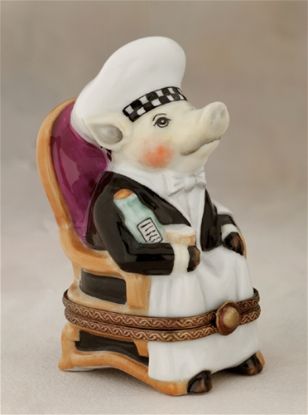 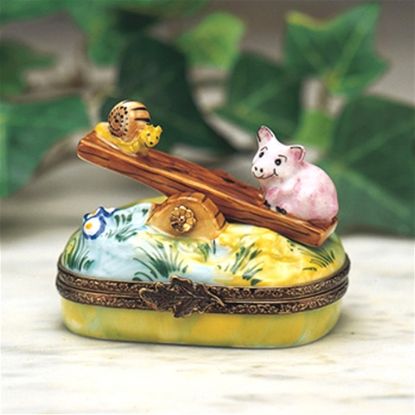 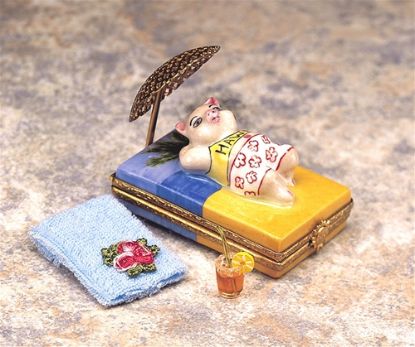 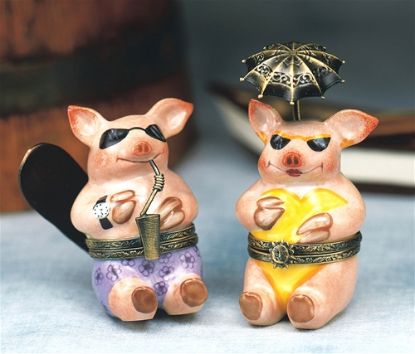 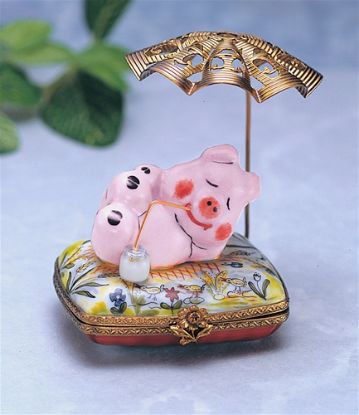 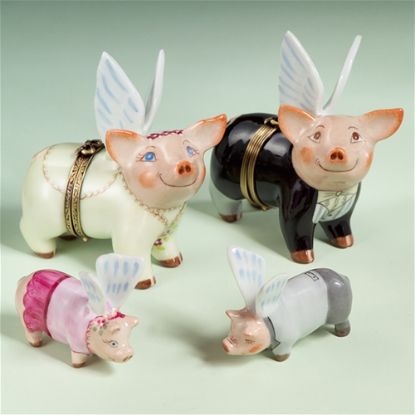 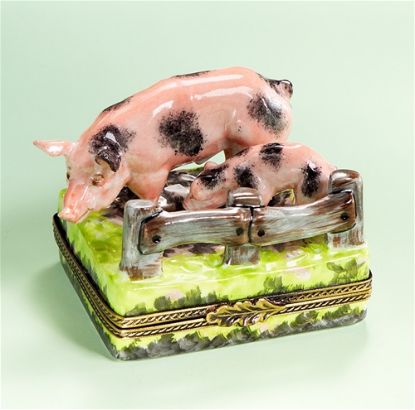 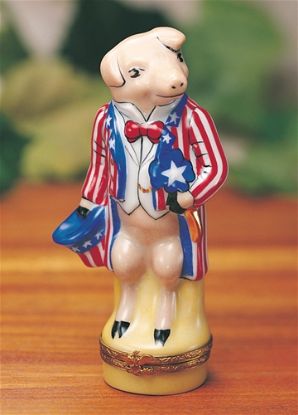 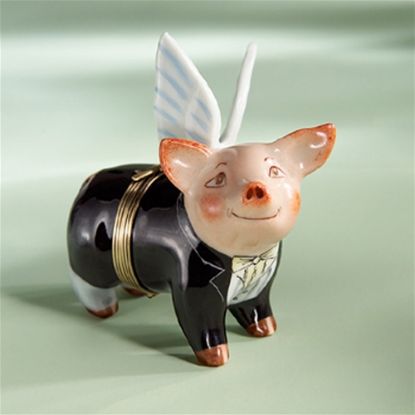 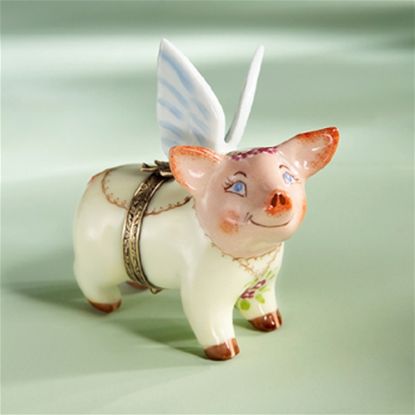 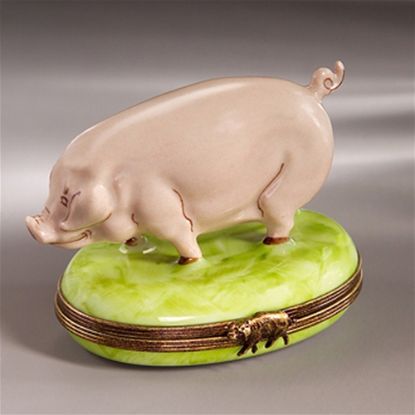 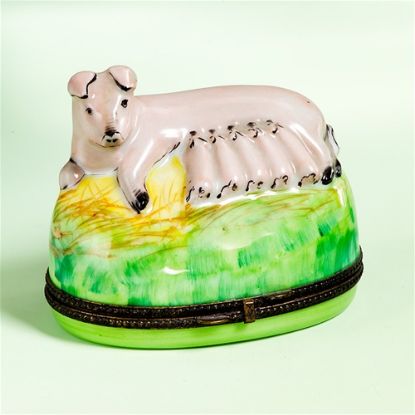 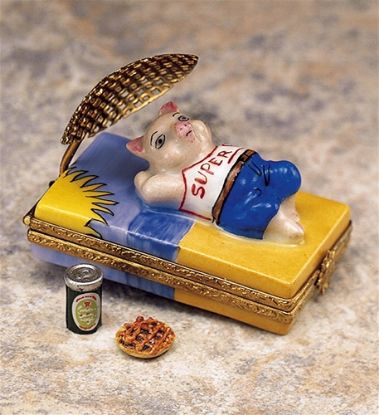